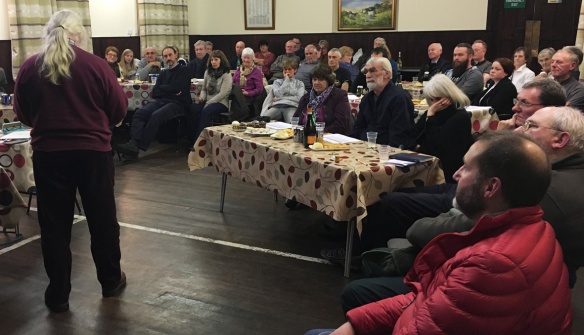 Thank you to all those who came along last night to our AGM, and to those who couldn’t manage but expressed their support with donations. We had a splendid turnout to enjoy the mince pies, prosecco and cup cakes. Our Chair, Lala, along with other members of the team gave an update on the campaign and a summary of the finances.

The team will all stay in their current roles except for Tom who wishes to step down as Treasurer when a replacement can be found. Lala highlighted our successes: over 60% of turbines have been withdrawn; Keirs Hill refused; Glenmount withdrawn and the Hadyards Hill Extension reduced in numbers. If anyone would like to join the team we’d love to hear from you. Alternatively, if you don’t want to fully commit, you may wish to be co-opted to research a particular topic which interests you. If you enjoy a party we’d love it if you could assist us in organising some fun events.

Our focus is now on Knockskae and Linfairn. Brookfield, the developer of Knockskae, have postponed the date they want to appear before the Planning Committee until next year, possibly March. The public inquiry into Linfairn is also scheduled for next spring. We’ll ensure they do not overlap and be ready for both.

Our mandate to protect the landscape around Straiton and surrounding communities was supported by all those present. The creation of a Galloway National Park would greatly help to prevent inappropriate developments and it was agreed we would campaign for this.

Thanks to your generosity over £320 was raised on the evening!

Click on the picture above to view the video clip

Scottish Power Renewables (SPR) managed to get their turbine stuck on top of a bridge on its way to Ewe Hill wind farm in Dumfries and Galloway.

Funnily enough the turbine size is similar to those at Dersalloch, plus there’s a similar bridge to negotiate at Cassillis on the B7045. Again SPR are going to remove the stone parapet – perhaps this time they’ll remember to remove the temporary railing first!

Watching the video gives you a good impression of the scale of the turbines and how disruptive it’s going to be for those living along the route including the village of Kirkmichael.

It is with great sadness that we have to report the Judicial Review into Dersalloch will not go ahead. Mark Gibson of Craigengillan (with the support of East Ayrshire Council) had done everything possible to bring one about but sadly a judge ruled that he would not allow his expenses to be capped. This would mean ScottishPower Renewables could extract their costs from him which may have been many thousands of pounds. They, ScottishPower Renewables, were represented by no less than four QCs.

It would appear to us that the Government have not followed their own Planning procedures whereby if the local council object to a development a Public Local Inquiry (PLI) is held. Both South and East Ayrshire Councils objected, along with 4,723 individuals. The high-handed way the Ministers have dealt with this, ignoring local communities, disregarding the Landscape Capacity Study and, of course, announcing the decision to approve without a PLI on the opening day of the Commonwealth Games so it would not receive any media attention, leave a very unpleasant taste.

A Public Local Inquiry would have been the fairest way to proceed; all parties could have voiced their concerns openly. Since the original application there have been significant changes with the formation of the Dark Sky Park, the South Ayrshire Landscape Capacity Study, a new Local Development Plan has been adopted and ospreys are now established at Loch Doon to name just some.

The construction of Dersalloch is by a foreign company, installing German made and serviced turbines and using a construction firm from southern Ireland so there would be very little local, or even national, economic benefit.

We have always believed that following the Planning guidelines and working with the system, although not perfect, is the best way to protect our area from inappropriate developments. This is a clear case of inappropriate development. We must hope that the Scottish Government stop overruling local communities and local democracy and that such a travesty of justice is not repeated yet again.