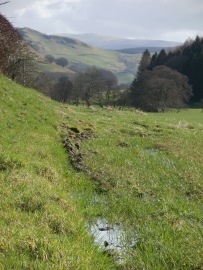 In an excellent article in the Scottish Review by editor, Kenneth Roy, the background of WilloWind is detailed – as far as details can be ascertained from this rather secretive company as their investors prefer to remain anonymous.
“The people who do business at 30 St James’s Square, London SW1, are 350 miles from the conservation village of Straiton on the Ayrshire-Galloway border, though much further if distance can also be measured by temperament and outlook. But the worlds of corporate London and rural Scotland, which have kept to their own patches until now, can no longer avoid each other. They are engaged in a battle to decide how our countryside will look and feel – even sound – for at least the next quarter of a century.
As individuals, the people who do business at 30 St James’s Square, London SW1, keep the lowest of profiles on the internet and their company’s website is a small one – it tells us little of interest about the business and names none of the directors. It is merely ‘passionate about renewable energy’. As well it might be.
What we do know is that WilloWind Energy Ltd, though shy about itself, is far from shy about its ambitions for Straiton and the neighbouring villages of Kirkmichael and Crosshill. It proposes to build 25 wind turbines there.”
To read more click here.

Have your say Cancel reply