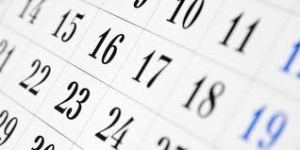 Just in case you have not seen the posters, or received the email, there are a couple of dates coming up to remind you about.

Put down your reading glasses, and pens and come along for a cup of tea and a bite to eat.  Find out how the Linfairn campaign is progressing and what needs to be done for the remaining 2 weeks. Raise any questions, concerns, and maybe even have a bit of a chuckle at some of the ‘howlers’ that have cropped up in the Planning Documents so far!

A number of concerns have been raised from our neighbours in Crosshill, particularly with regard to access routes and traffic.  This session is an opportunity to bring people in Crosshill (and anyone else who would like to come) up to date with the proposal and the objection process so they too can make their feelings known.

SSfS look forward to seeing you there!

Many thanks to MEP Struan Stevenson who has sent in his objection to Linfairn Wind Farm, the first of our representatives to do so. Watch his latest video about wind energy.

Since posting about last night about the single turbine at Glenauchie, the South Ayrshire website seems to have been having problems. I am sure it will be sorted out, but if you wish to comment on the application in the meanwhile, you can of course email them at:
planning.development@south-ayrshire.gov.uk

The reference for the Glenauchie turbine is

You could mark it to the attention of the case officer, Austin Cooke

Or you could write to 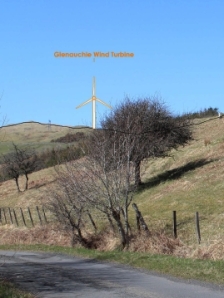 An application for a single turbine has been made to South Ayrshire Council at Glenauchie in the upper Girvan valley. A single turbine might seem small beer compared with the Linfairn wind farm proposal: however the fact remains that the proposed Glenauchie turbine is 77m high – which is 253 feet, and so it far exceeds the height limits set by South Ayrshire’s own guidelines. It would be easy, but wrong, to ignore the Glenauchie application simply because it is in the shadow of the Linfairn application. It would set a precedent for developers to try bypass the planning guidelines which exist.

In the South Ayrshire Landscape Wind Energy Capacity Study of July 2013, it states on page 58 (guidance for Intimate Pastoral Valleys), that: “The assessment found no scope for the large and medium typologies (turbines >50m) to be accommodated within the Intimate Pastoral Valley (13) landscape character type.” The study recommends that there would be very limited scope for single turbines at the lower end of the 30-50m range in this landscape context – i.e. less than half the height of the turbine being proposed. (Click here to download the report in PDF form)

At SaveStraiton, we agree strongly with South Ayrshire’s own view that large industrial turbines are unsuitable in this intimate valley context. It would be very good if any objections to the Glenauchie turbine could be made AS SOON AS POSSIBLE on the South Ayrshire planning website: CLICK HERE TO MAKE YOUR COMMENT

The closing date is officially past, but comments are still being accepted. 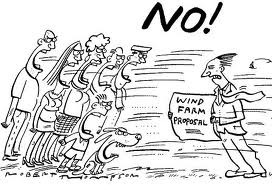 Well folks, you may well now have digested some of the hair-raising Linfairn Windfarm planning documentation,  seen the recent articles in the local papers, posed for the obligatory ‘horrified residents’ photo call, and received the SSfS newsletter.  It’s been a busy week!

Despite developers having years to prepare their documents, the good old public only have a 28 day window to respond.  In our case, we have until the 11th November 2013.  To make it as easy as possible for people to make their feelings known on this proposal we have prepared a How To Object page for you.

The good news, is that Investment Bank led, Willowind (who perhaps opted for the ‘budget’ package from their energy consultants SgurrEnergy..?), have made the initial stages of the objection process very easy for us!  As well as being  littered with errors, omissions, contradiction, and arrogant assumption, they have admitted time and again how many  guidelines and planning policies they contravene, and how ‘significantly adverse‘ this proposal is particularly within 10 km of the site (of course, it’s all for the greater good so they also admit they don’t really care).  Here is a tiny taster of some of the gems in there:

These are just some general issues, there are in truth many more.  Several people have raised points with us and along with some of our own we have put them together with some information on how to object. We only have one shot at this, so please make sure your voice is heard! 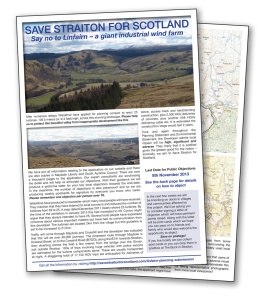 Our latest newsletter is packed with information about Linfairn with maps showing the location, a description of the access route and how this project will affect one of the most beautiful areas in south west Scotland. To download your copy click here.

If any of our local supporters can come at short notice, it would be great to have as many of you as possible join us at the Buck, in Straiton, tomorrow (Sat 5th October) at 12:30pm for a photo with the Ayr Advertiser and Carrick Herald who are running a story on our campaign next week.   SSfS has already had some press attention from the Ayrshire Post  this week, after  Bill Steven told it like it is, in response to Willowind lodging their Section 36 planning application for Linfairn Windfarm.  .. ‘Their community engagement has been pathetic, with absolutely no contact made with the many people who will be directly impacted by this windfarm‘…You can read the full article here.