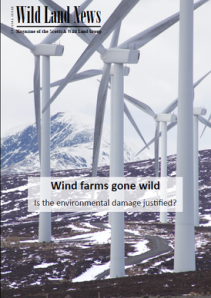 A press release by the Scottish Wild Land Group for issue tomorrow has been shared by our friends at Scotland Against Spin. This focuses on the latest special edition of the Wild Land News entitled ‘Wind farms gone wild: is the environmental damage justified?’

A free PDF and online version of this issue can be found here and there are also details of how to purchase a hard copy which is probably worth doing as there is a lot of great reading in it!

The press release is detailed below.

The Scottish Wild Land Group today published a special issue of its magazine, Wild Land News, dedicated to the issue of wind energy. The issue, ‘Wind farms gone wild: is the environmental damage justified?’, calls into question the Scottish Government’s focus on wind power as an effective method of tackling climate change. It suggests that far more needs to be done to protect Scotland’s communities, environments and landscapes from opportunistic development.

The magazine features contributions from respected scientists, naturalists and artists; a powerful consensus that wind energy policy has been inadequately justified and comprehensively mishandled. Contributors identify threats to Scotland’s internationally important wild land, protected native species, cultural heritage, community cohesion, and democratic processes, and argue that wind farms make a vanishingly small contribution to the fight against climate change at best, and may even prove to be counter-productive.

The Group concludes that wind farms in Scotland will:

· Destroy much of our wild land and peatland carbon sinks along with numerous habitats and species;

· Prevent the development of alternative energy sources and investment in energy conservation;

· Impose unacceptable financial demands on those who can little afford them, especially the third of Scottish households already in fuel poverty;

· Distort our resource allocation systems by channelling public money to large energy companies with subsidiaries in tax havens, who arbitrarily pass a tiny fraction on to a few communities;

John Milne, Co-ordinator of the Scottish Wild Land Group, said: “We are at one with the environmentalists who believe climate change is the greatest threat facing humanity but disagree with those who claim that wind generation is even part of the answer. We believe that the scramble for wind farms is doing great damage by deluding the public into believing that a meaningful contribution is being made to a reduction in CO2 emissions. Resources and attention are being diverted away from real solutions such as appropriate transport policies and energy efficiency, conservation and alternative renewables.”

John Constable of the Renewable Energy Foundation, writing in the magazine, said: “the general public now realise that they are being asked to make economic and environmental sacrifices that are not only pointless but actually delay more constructive action. The mass deployment of existing and inadequate technologies is simply a dead end.”

Sharon Blackie, editor of EarthLines magazine, said: “if the price of our current excessive level of electricity consumption is the permanent non-renewable loss of the pitifully little that is still wild and natural in this country, then it’s too high a price to pay.”

The Scottish Wild Land Group believes that energy policy must be the subject of an urgent investigation by an independent commission, and that a robust wild land designation that respects the environmental, cultural and economic importance of Scotland’s landscapes must be introduced. It is supported in this by a number of other organisations including the John Muir Trust.

The Scottish Wild Land Group is Scotland’s oldest and only volunteer-run wild land charity. It campaigns for the protection and promotion of Scotland’s invaluable landscapes, environments and species. More details on the group’s work can be found at www.swlg.org.uk.