You can see the draft planning framework at www.scotland.gov.uk/Topics/Built-Environment/planning/NPF3-SPP-Review and also follow links to make your own submission.

Our latest newsletter is now printed, those living locally should receive a copy through their door. For those living further afield you can download your copy here.

Bea Holden and Jonathan Meuli have produced a report on Tourism and Wind Farm development in and around Straiton.

WIND FARM DEVELOPMENT & TOURISM IN STRAITON; a case-study in tourist provision for the Galloway Forest and Dark Sky Park.

Although many of the report’s concerns about the harm posed by wind farms to tourism in Straiton overlap with those of the Save Straiton campaign, it is a personal take by the authors and they don’t claim to represent any of the other tourist businesses in Straiton. Consequently the printing and postage was privately funded by the authors and didn’t use any campaign funds.

It contains lots of interesting information about Straiton not available elsewhere and lots of nice historic quotes about how beautiful people have found our village over the centuries. Plus some good arguments about why we should preserve this beautiful landscape. We hope you find it a good read!

There’ll be a Soup and Sweet lunch on Sunday 12th May. This will be both a fundraiser and a chance for a get-together and informal catch-up with the campaign.
from 1 o’clock
McCandlish Hall, Straiton
£5 adults / £2.50 children.
If you are free to help on the day or can  contribute by baking meringues, or apple pies, or by whipping up a trifle (click here for the recipe for the rather delicious-looking one pictured) or by providing some the basics of crackers / cheese / ice-cream  please get in touch with Bill or Lesley Steven on 01655 770637 or email williamsteven@btinternet.com. Donations of raffle prizes would be greatly appreciated and  can be handed in to the Buck or the Smithy at Straiton.
Look forward to seeing you on the 12th May!
Lesley and Bill

The Moffat report (published in 2008: commissioned by the Scottish Government to investigate the effect of wind turbines on tourism in Scotland, and much quoted by them) warned against lining the M74 and the A9 with wind turbines, as they are the principal tourist arteries into Scotland. The report, as you see, has been ignored: and the M74 is now being viewed by at least some English people as “what we don’t want in England”. The picture above is from the Stop Killington Wind Farm website, and this is how they caption it: “Actual wind turbines in Scotland on the M74 south of Glasgow. Over 200 turbines, continuing for many miles, near Beattock summit. We don’t want the approach to the Lakes and Dales to look like this.”
Perhaps not all Scots realise what is happening either – especially those living on the east side of the country: this is from the Benvironment Blog (read the blog post itself for more): “I drove back home from England yesterday.  Once on the M74 I usually come off the motorway at Moffat and take the impossibly scenic drive along down the Tweed Valley to Edinburgh.  But yesterday I drove up to the junction with the A702 instead, which takes you through a high-altitude stretch of motorway…….

If you’re not familiar with it, it climbs slowly alongside the west coast railway through a long narrow winding valley.  The area is thickly forested and there are no settlements or houses.  It is often very wet or very cold….or both…..and though the slopes are wooded it is a bleak and lonely landscape.  Eventually the forests give way to the rolling grassy hills of the Clyde Valley.

I always enjoy this stretch.  Though by this point you have already travelled through 40 or so miles of Southern Scotland, the bleak, lonely isolation of this stretch feels to me like the perfect introduction to the country and gives a hint of what wonderful landscapes await you.  It is empty and remote.

I was stunned this time however, as in the relatively short time I’ve been absent from these parts much of the forest has been felled, and there are what appear to be two wind power stations on either side of the motorway.  The turbines aren’t of a modest size, these are huge.  Many currently don’t have the blades attached so just look downright eerie standing there, like something out of War of the Worlds.  Not least because the forests they’re standing in have been stripped bare.

Because it was so unexpected, it was shocking.  It was very sad to see this beautiful little corner of Scotland trashed in this manner.  A few miles to the north, off the motorway on the A702 I was depressed to see another wind power station being built in the Clyde Valley.  When I started writing this I’d no idea how many turbines are going up, but a bit of digging this afternoon revealed that the M74 turbines will eventually number over 150!  It’ll be one of, if not THE biggest wind power station in Europe.

I had the good fortune to go walking in the Lowther Hills (which overlook these new developments) last year and don’t recall seeing ANY power stations in the area.  The pace of this change is alarming.”

And so it goes on, rightly weighing up the merits of wind turbines and forestry plantations: read for yourself, and perhaps take a journey down the M74 yourselves to see what is planned for the area around Straiton, and for many other parts of Southern Scotland.

This is – roughly speaking – what Linfairn wind farm would do to the Girvan valley. It shows the Clyde wind farm – and comes from the Turbine Watch 312 website, where it is linked to an article on Alex Salmond’s view that “turbines do not seriously detract from the Scottish scenery.” This is old news (October 2012), but it’s a new photo for our website, and one that brings home what we are faced with in Straiton.

The scenery / tourism arguments have been heating up: we have put up some other links on the tourism page: at savestraitonforscotland.com/impact/tourism/#tourismlinks

Of all the places to spot a peregrine falcon, the most ironic must surely be perched on a meteorological mast at Knockgardner, right in the middle of the northern section of the proposed Linfairn wind farm. This is exactly where one was photographed by John Elverson at the end of March. You can see all three of the photos he managed to take at savestraitonforscotland.com/impact/wildlife/#peregrines and also read his account of how he spotted the bird. John has been in touch with the RSPB about this sighting, who responded,

“As you have highlighted peregrine is a species which is considered to be at some risk from wind turbines in certain locations. Fortunately, unless turbines are located in close proximity to a nest site (e.g. within 800m) the collision risk is likely to be fairly low for this species.”

South of Scotland MSP, Graeme Pearson (centre) and his Regional Development Officer, John McKenzie (far right), gave their support for the campaign during their visit to Straiton this morning. Graeme said “there is something special about what we’ve got here and we shouldn’t destroy it.” And about windfarms in Scotland he mentioned that “the money’s wrong, the technology’s wrong. The future for Scotland is about maintaining tourism and the environment for the future.”
He offered to ask questions in Parliament on our behalf and gave us a great deal of useful information and advice.

Radio 4’s “Open Country” this morning had an interesting interview with Mark Gibson at Craigengillan, and a visit to the Dark Sky Observatory. Also much about the Wild Spring Festival in Dumfries and Galloway: click here to listen on IPlayer.

Also: “Wind farm-free zones planned for Scotland” – an article in the Scotsman on recent pressure by Scottish Natural Heritage on the government to keep Scotland’s wild places free of wind farm development. Apparently most of this land is so far defined to be in the north and west of Scotland. Perhaps the Galloway Forest Park should also benefit: you can’t have a “Dark” park unless it is also a “Wild” park. There were articles on the same topic in The Times and the Herald.

Sandra Osborne MP met with Bill Steven and members of the campaign committee to discuss the proposed wind farm developments around Straiton.
Sandra listened to our concerns about the scale of the proposed industrial wind turbine developments; and the impact which they would have on the village and surrounding areas.
We are delighted to report that Sandra will engage with both the UK and Scottish Government on our behalf and will offer help in other key areas.
Bill Steven asked Sandra her views in particular on the WilloWind / Linfairn and the PNE / Dalmorton proposals and she stated she was ” utterly and totally opposed” to them.

I think we occasionally mention how beautiful Straiton is…?  Perhaps the best proof (as always) is in the pictures: these were taken on a cold and sunny Easter Monday.

We have uploaded a new batch of five composite photos. Two of them of the Girvan valley at Genoch (detail to the left) and another three which show the less well-known and spectacular views from Knockskae, which (among other things) show the crags of Craig Hill in all their glory. It is worth bearing in mind, whilst you enjoy these composite photos, that both views would be completely filled by wind turbines, from horizon to horizon, if the proposed farms are built.   You can find them here in slide-show form or on the Gallery page at savestraitonforscotland.com/gallery/#composites 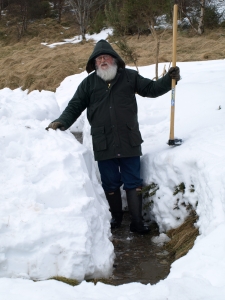 the high road to Knockskae

This is Santa, sorry Sandy Millar up to his waist in his drive on bank-holiday Monday. Sandy and Christine live at Knockskae, up beyond Linfairn farm. As their smallholding will be very badly affected by the wind farm proposals, they are strong supporters of our campaign.
They are also, as you see, still snowed in. If anyone would like some fresh air and exercise over the Easter holidays, Sandy would be delighted to make a donation to SaveStraiton’s campaign funds in return for any help that anyone can offer with the digging. The views are lovely, the children can make an igloo, and your cheeks will glow. Just take a thermos. Sandy has some spades and shovels – but please contact him before you go at sandy_millar@btinternet.com or on 01655 770 393

The sun shone on Dorothy and Stration yesterday. The fundraising day at The Buck raised a fantastic £380. Huge thanks to Dorothy and her helpers on the day: Ffion, Annie and Lesley and of course Peter… Dorothy’s biggest helper!
Dorothy would like to thank the tremendous number of people who came out today to support Save Straiton for Scotland from all over and who enjoyed the company and the spectacular scenery around Straiton on one of the best days of the year so far.

We also had two separate donations of £120 yesterday, so we have rocketed through the £13,000 barrier.